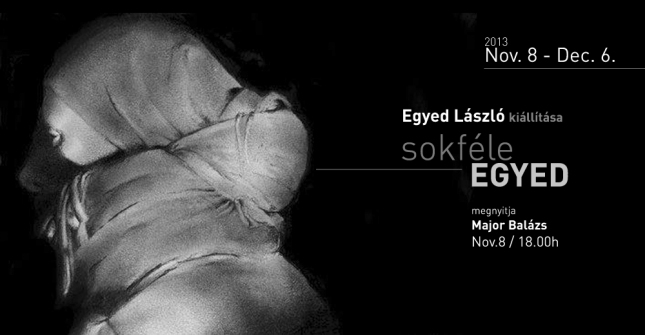 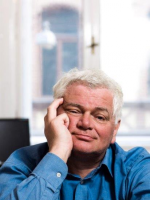 Laszlo Egyed - Exhibition
Ateliers Pro Arts, Horansky u. 5.
Review by Peter Fekete
Laszlo Egyed is a master draftsman.  The solidity and plasticity present in his work arises from the quality of the drawing, the intensity of the observation and the deliberate choice of lighting.
Picture
His depiction of the back of a man leaning sideways supporting his own weight, is an object lesson in good drawing, and merits close study.  The surface of the body comprises many planes that smoothly pass from one to the other.  The artist observes the contours and the lines where the shadow fall and interprets these planes for the observer, thus creating the illusion of solidity in a two dimensional representation of a three dimensional form.  In this drawing the contour between the plane receiving the light from the left is subtly indicated.  There is another smooth contour that interprets where the thick muscle that runs up along the spine makes another curve into the pit of the back.  From there Egyed brings out the light falling on the other side of the pit.  The form darkens as he picks out the outline of the shoulder blade, the rib cage, the obliquus externus, the pelvis and the gluteus maximus.
I do not wish to give the impression that drawing for Egyed is merely an object lesson in anatomy; what he has mastered is the hidden language of form out of which emotive meanings, in drawing that is this good, are created.  I note that this drawing is flawless as regards proportion, and I also observe the clever way in which Egyed allows the light falling from the right hand side to seemingly obliterate the line where the torso and arm end; just the hint of their shape is conveyed.  This is a way of thinking that is unique to artists, because artists interpret form directly with that part of the brain that sees, and identify shapes, forms, patterns, dynamics that would otherwise be invisible.  Thus, paradoxically, while the artist begins with the observable, he penetrates behind that to the hidden transcendence that is present in form, but only sensed and usually not understood.  Drawing is a form of understanding.
Needless to say, no photography is capable of such observations.  Without the direction of the photographer, as artist, a photograph merely records.  A photograph does not see contours, and does not interpret them.  It is pointless to say that a photograph can reach out for the ineffable.  This is not to say that photography is not art; it is great art, but like all great art, requires the direction of the artist: there is no art without an artist.
Picture
Egyed's study of a reclining nude is another particular favourite of mine.  It is wonderfully sensitive, conveying the fragility of form; the light is depicted as falling subtly over the figure, caressing it.  The image is particularly plastic in its impression; one can feel not only the pressure of the rib cage resting against the surface but also the creases of the skin.  The darker colour behind the pelvis helps to throw the form forward and create the illusion of depth.  This image is intensely emotive; highly evocative and very loving.
Picture
His image of two woman lying one on the other is a clever study of the interplay of light and shadow creating the visual illusion of fusion; the evolution of light into shade from right to left exemplifies a profundity of seeing that is not commonplace.  While it is difficult to express in words the emotions such images evoke; certainly, this is a powerful rendering.
Picture
Picture
The subtle interplay of light and dark evoking mystery is perhaps the principle theme of Egyed's work, enhanced by chiaroscuro and sfumato.  It is clear that he delves back towards the Renaissance for his inspiration, but that is not to say that his work is not intensely modern as well.  But not postmodern.  There is too much life, too much joy in his love of the plastic melding of form upon form to say that this is a postmodernist statement which is preoccupied with fragmentation, decay, neurosis and death.  Perhaps Egyed represents to us a counterpoise to the theme of decay; a return to a preoccupation with direct observation and skill as a means to derive meaning.
Picture
Egyed's work begins with the intense observation of light falling on organic planes; therefore, it is always witty and clever.  In some works the wit and humour are more prominent than in others.  In some works the observation is very direct, intense and almost brutal in its verisimilitude.  It is all worth seeing.
If you wish to refresh yourself by seeing good drawing, then visit Laszlo Egyed's exhibition.
The exhibition runs until 6th December, 2013
Picture
Magyarul
Contact Peter Fekete