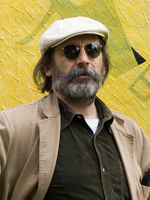 Szilamér Nánay obtained his degree at the Hungarian Academy of Applied Arts, then finished his studies at the Vocational Training Institute of the Academy in 1980. His artistic work has been influenced by a strong interest in the natural sci- ences since the start of his career, so he approaches the contemporary artis-
tic and theoretical issues from this point of view. This is how the idea of an alternative fictional evolution was born, which developed into a working theory by the end of his first decade as an artist.
His first pieces of work had the name Derivation I, II, ... where he expressed his future artistic aims and ambitions, derived from a summary of his studies and experiences. First he employed the devices and materials of upholstery * tapestry techniques, whereas later he mixed the techniques of painting and graphic arts.
Dr. Imre Nagy, art historian, described Nánay’s early period in the following way: ”His search for the multi-dimensional characteristics of the world can be identified even in his earliest graphic and textile works. [...] By scrutinising his graphic works and paintings, one can sense a deep spiritual essence emanating from his works.” This early period was followed by a larger series entitled Metamorphosis. The artist had a two-fold intention. Firstly, he undertook to make silk- screen prints and applications that could be taken and judged as separate graphic sheets. Secondly, they might constitute the basis of his aims with another technique in the future. This technique, termed textile-platting, was an attractive medium for the artist, because of its thousand-year history, and intercontinental traditions.
The adaptations were completed quickly and his exhibitions were a great success, his works selling all over Italy. However, due to the economic and political anomalies of the era he was forced to abandon the project. Despite all these setbacks, he managed to com- plete his subsequent series entitled Metamorphosis II. The series preserved the earlier formal and content features, yet it differed considerably and bore out the maturity of the idea.
2 The 9 m    painting exhibited in 1989 at the Budapest Art Gallery marks the commence-
ment of his next phase. The organic motifs and signs, which determined the forms of this artistic period, first appeared here and catalysed the development of approaching changes. It seems that the path of his development led through the Premodern drawings. In these large-scale ”sketches” the aim of Minimalism was taken further, and could have led to the expression of more complex content-related arrangements.
Quoting dr. Imre Nagy: ”Szilamér Nánay‘s oeuvre has two sources. Firstly, because of his textile back- ground he is definitely enchanted by colourful surfaces and brush-work; secondly his inner nature fills his graphics and paintings with lively gestures and signs of long forgotten ancient cultures. [...] Nánay attempts to help us to get to know ourselves, and what’s more, they make us meditate on our mission in this world.” There is another, very similar opinion by art historian Géza Bodolay: ”[...] Nánay created a real synthesis when he combined the raster-grid taken from textile-expression forms with the picturesque world of the free-flowing natural forms. These thematic interactions suggest a feeling of endlessness. [...] Nánay seeks to answer one of the fundamental problems of today’s art in a rather novel way. He challenges us to face up to the organic unity of the world which has been alienated by technology and industry.”
At that time he was fascinated by ideas closely aligned to his »alternative evolution« notion, and he felt the need for expressing a »working theory« of alternative evolution. The crystallisation of his thoughts occurred only some years later.
It is hard to express in words the idea which Nánay is following in his new phase, because he is trying to incorporate everything, is relying mostly on his intuitions and, as he him- self says, is hypothetically orientated. The themes of his recent works indicate a clarification of ideas and emphatic contempla- tion. His pictures of all shapes and sizes are constructed from the same set of elements, and they convey a message of transcendental truth to the people of today.